It’s time for some spaghetti that isn’t pasta! Are you a fan of pasta, spaghetti to be precise, guess what? You can cut down on the starchy stuff with some spaghetti squash, it tastes so good, and it looks just like your regular pasta spaghetti, so it’s a win-win.

I have always been amazed at how this turns out to be spaghetti-like after cooking, with the strands, looks and all, but then, who needs the answers.

What I can at least do, is get to know what makes this spaghetti squash taste amazing and the benefit it comes with.

So, if you are as curious as I am about this spag-fruit, let’s hop on the curiosity train together.

What Is Spaghetti Squash?

Spaghetti squash is a fruit which belongs to the family of plants called Cucurbita, some fruits such as pumpkin and other varieties of squash also come from the Cucurbita family. The unique thing about spaghetti squash is its resemblance to regular pasta spaghetti when cooked; this encourages the use of the squash as a substitute for pasta spaghetti thereby cutting low on the carbs and replacing it with the fiber and vitamins that come with a good squash.

Spaghetti squash can either come in pale yellow or orange colour, any spaghetti squash which is still green on the outside should be considered as unripe and not fit for cooking.

It can be cooked in many ways and served with different sauces or with soups. A typical spaghetti squash is solid and hard when uncooked, and when it is cooked, it falls off easily from its skin forming tiny spaghetti strands.

Spaghetti squash is a fruit which was originally grown in China in the year 1914, unlike the popular belief that it is an American originated fruit; Spaghetti squash was taken to America by Chinese researchers who needed places to experiment the productivity of this plant. 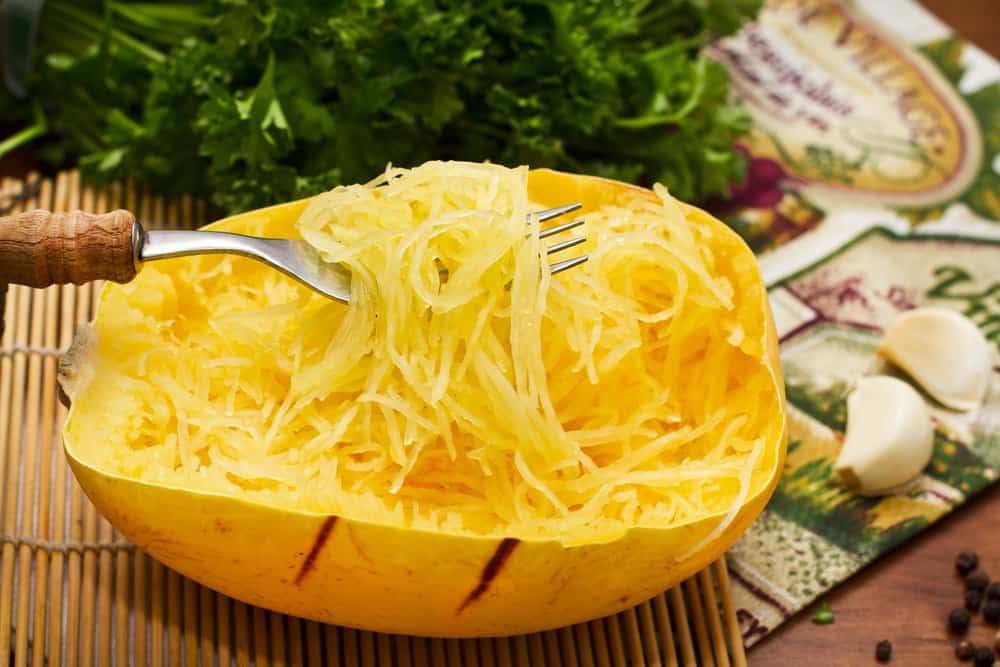 The idea of planting and growing this crop later picked up by an American firm and introduced to other parts of the US in 1936. Back then, spaghetti squash was commonly referred to as “vegetable spaghetti.”

Even with this fact, there are still a lot of arguments as to whether or not spaghetti squash really ordinated from China with a common dissent that the fruit originated in North American and continued its spread from there.

During the World War II, when food was in a serious dearth, vegetable spaghetti became a very viable option for lots of people. After the end of the world war, vegetable spaghetti was again neglected, and it still had a long way to go in order to gain it’s now widespread popularity in the US.

Being that it is entirely a fruit, the benefits of spaghetti squash are endless, but there are a few noticeable specifics which include its fiber content, and its carotenoids. Upon consumption of spaghetti squash, you would have taken in a high amount of fiber which provides the same satisfaction as your regular pasta spaghetti, but the difference is that you get far lower level of calories if any at all for that amount of fiber.

Spaghetti squash is also very high in carotene which is responsible for the yellow and orange colours present in some fruits. Most carotenoids are transformed into vitamin A in the body, and they help with the prevention of cancerous cells and improvement of vision.

Aside these mentioned benefits; spaghetti squash contains vitamin C and calcium which in turn acts as antioxidants and fortify the body with strong bones and teeth. Just looking at the picture of that lovely red sauce with the meatballs on the recipe page is satisfying enough. It states how you can make the turkey meatballs and this allows you decide how much spinach you want in the balls.

Tomato sauce is quite easy to make, and most people have their way around it but if you want a recipe for a smooth, tasty tomato sauce, make use of this.

Spaghetti Squash with Alfredo sauce is undeniably one of the best ways to have your spaghetti squash. If you go the extra mile to make use of a smashing recipe like this one by Mommy Hates Cooking, don’t judge by the name, you are sure to give your family and friends a fun-filled eating time. It is so sapid and palatable; there are included tips on how to shred your chicken to get only the parts that are less fatty, what more could you ask for, give it a try.

Introducing spaghetti squash into your home can quickly supplant pasta spaghetti, you may decide to not entirely rule out the consumption of pasta spaghetti, but it is safe knowing that you can always make a change and a nutritious one at that.

There are numerous ways you can prepare your spaghetti squash aside the classic recipes we have listed for you above; you can get a good pick of more recipes from this cookbook.

Be sure to experiment and jazz up your spaghetti squash with other fruits and ingredients as long as it appeals to you. How long have you been eating spaghetti squash? Let me know with your comments and messages, also drop in a picture of your most recent spaghetti squash try out if you can, I am here to view them all.