It shouldn’t be every time we run to the parmesan or the mozzarella cheese; there are times we go back to the basics before all the modifications and new discoveries began, what basics? Cottage cheese, ‘Oh wow, really? ’

There is a kind of professionalism that comes with knowing the way different dishes taste, both old and new, knowing about food and dishes that were staples from times past also shows that you are indeed in touch with your history as regards food.

Cottage cheese still comes in handy a lot of times, and we are going to discover how to make these cheese, what it tastes like and how it came about. Let’s know cottage cheese shall we.

What is Cottage Cheese?

Cottage cheese is a kind of cheese that is made fresh, one thing about fresh cottage cheese is that they do not stay so long after preparation, they need to be consumed within few days after processing when preservatives are not added to it. Cottage cheese is usually white in colour and has a creamy feel to it. The main thing that distinguishes fresh cheese from other forms of cheese is the ageing process.

Cottage cheese undergoes no form of curing or aging, so the flavour which comes from it isn’t as deep as that of aged cheese.

There are different sizes and verities of cottage cheese, and they can be consumed on their own as done in some restaurants or added with other ingredients.

Cottage cheese is an ancient kind of cheese which has been passed down over time.

There are different ways of classifying cottage cheese such as their sodium level and the amount of fat found in the milk used. 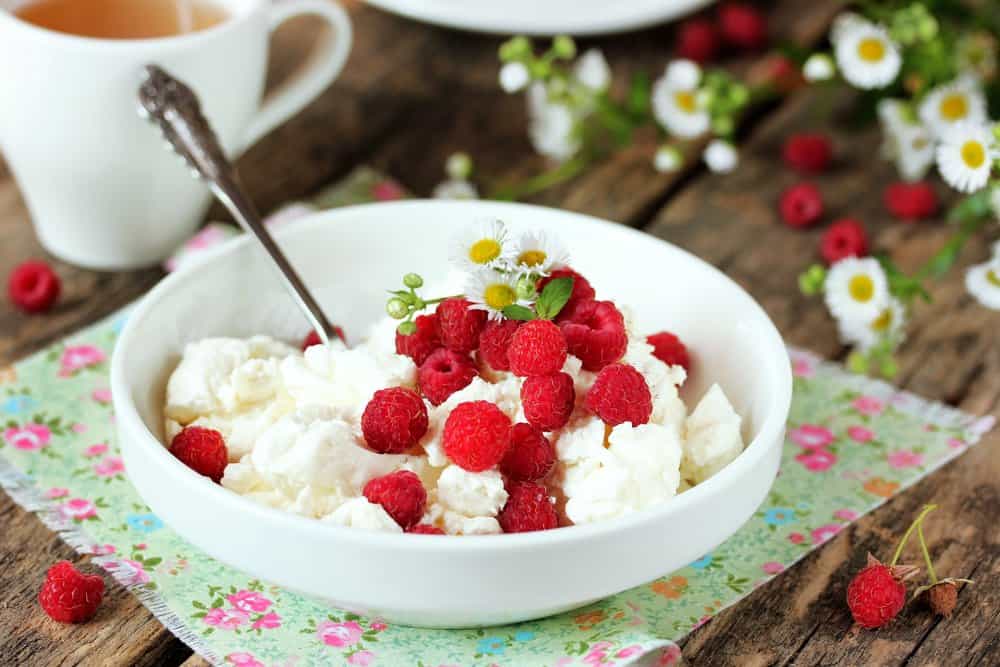 There are some cottage cheese with high and low sodium levels which you can opt for but for better differentiation; we are going to talk about the large cord and short cord cottage cheese.

The determinant of this kind of cottage cheese is the addition of an enzyme called rennet. Rennet is an enzyme usually added when making cottage cheese to speed up the rate at which the milk coagulates.

The use of rennet in the cheese makes it form into bigger chunks hence the name ‘large curd cottage cheese.’

There are different stories linked to the start of cottage cheese, one particularly interesting one has it that cottage cheese was formed when an Arabian farmer stored up some milk in the belly of a goat.

The travel time combined with the natural coagulating enzyme found in the stomach of the sheep added up and formed the now known cottage cheese.

The name ‘cottage cheese’ came about in America in the early 1800’s because milk was easily gotten at that time and lots of cheeses were made mostly in cottages.

There are also mentions of cottage cheese on ancient walls and tombs in places like Egypt and Greece; this shows for certain that cottage cheese has been around a really long while.

Depending on the brand of cottage cheese you buy, cottage cheese could have different tastes. The only way you can always get the exact taste you want is probably by making it yourself, even at that, there will be slight irregularities in the taste each time. Another determinant of the taste is the kind of cottage cheese you buy; cottage cheese made with rennet has a less acidic and more consistent taste than the ones without rennet.

Generally, the taste of cottage cheese should be creamy and a bit salty. Cottage cheese which is high in fats will have a significantly creamier taste than the low-fat varieties.

Another very pronounced feature when you put some cottage cheese in your mouth is the many curds, even after chewing the cheese you still get tinier bits in your mouth. No matter how many chewing awards you have.

Are you a fan of soft cookies? Then you will like this recipe by Little Miss Celebration, they look so inviting, colourful, and cottage cheese happens to be the main ingredient of the whole recipe, so you wouldn’t get so confused if this happens to be your first try out. It is a perfect way to lay your hands on cooking with cottage cheese and introducing it to people if you haven’t done that already.

For a quick fix and healthy breakfast, try out this cottage cheese crepes recipe by Elizabeth’s Kitchen Diary. What is better than combining protein stashed cottage cheese with fruits like bananas and berries? For those of you who have issues with the chunks you get from cottage cheese, this recipe is for you.

You get to blend the cheese with other ingredients before you start cooking, so all the large chunks are cut down properly take a look.

Cottage cheese is one of the most protein-filled cheese you can have, aside from the protein, it also has a lot of other nutrients in smaller quantities which makes it qualify as healthy in my books.

There are so many other recipes you can use cottage cheese for and if you are in need of some, get a handful from this cookbook.

Making your cottage cheese yourself isn’t a bad idea, it is far easier to make than almost all other cheese, and the ingredients aren’t farfetched.

For a recipe on how to make cottage cheese, try Eating from the Ground Up and for one without the use of rennet, try this by My Food Story. When you are all done, let me know how it turned out, throw in a picture or two if you need to, am here to see them all!