You can spend thousands of dollars on culinary knives, but if your knives are dull, they are no better than the cheapest knives you can buy. It’s important to choose knives carefully (see our picks for the best kitchen knife sets under $200), but maintaining your knives is equally important.

In this article, I’ll discuss the basics of sharpening knives and what to look for in an electric sharpener, then I’ll share some sharpener recommendations. Feel free to check out my choices on Amazon to see current prices and reviews by click the links in the table.

Why Sharpening is so Important

The first and most important reason that sharpening your knives should be a top priority is safety. A dull knife is prone to slipping, and it could be the tip of your finger it slides onto. Not good.

A dull knife is also just plain difficult to work with. Your hand will tire faster, and it becomes frustrating to complete any chopping or slicing.

Lastly, maintaining a sharp edge on your knives will give you better results. The texture of food is important, and if you’ve had to hack away at something to slice or dice it, the cut edge will become coarse or torn in a way that is unpleasant for the look and feel of the food as you eat it. Many knife hobbyists recommend manual sharpening with stones, rather than electric sharpeners. Why? Electric sharpeners take more metal away from the blade, wearing it down faster. They also offer less versatility in terms of the edge angle and such.

However, manual sharpening requires an investment of time and money, which many home chefs may not have an interest in making. An electric sharpener offers a relatively inexpensive and simple but still sufficient way to maintain your knives. Don’t be dismayed by the purist talk—an electric sharpener is a perfectly adequate tool for the average home chef who’s not interested in becoming a knife expert!

Here are some of the specifics to look out for when shopping for an electric knife sharpener:

Some knife sharpeners are very simple, with one setting for sharpening. Others offer more versatility, like having multiple stages that hone and polish and can handle serrated knives.

All knives have an angle to the blade that was set in the factory. For European knives, it’s typically 20º, while for Japanese knives it’s 15º. (The 20º blade is more durable but less sharp, while the 15º blade is sharper but more prone to nicks and chips.) Many sharpeners only operate at one angle.

A note before getting started: an electric knife sharpener is a tool meant to maintain your knives, which can be a serious investment in your home cooking adventures. So, read the directions! Any sharpener can ruin a blade if misused, so be sure you know what you’re doing before you run your good knives through the machine. 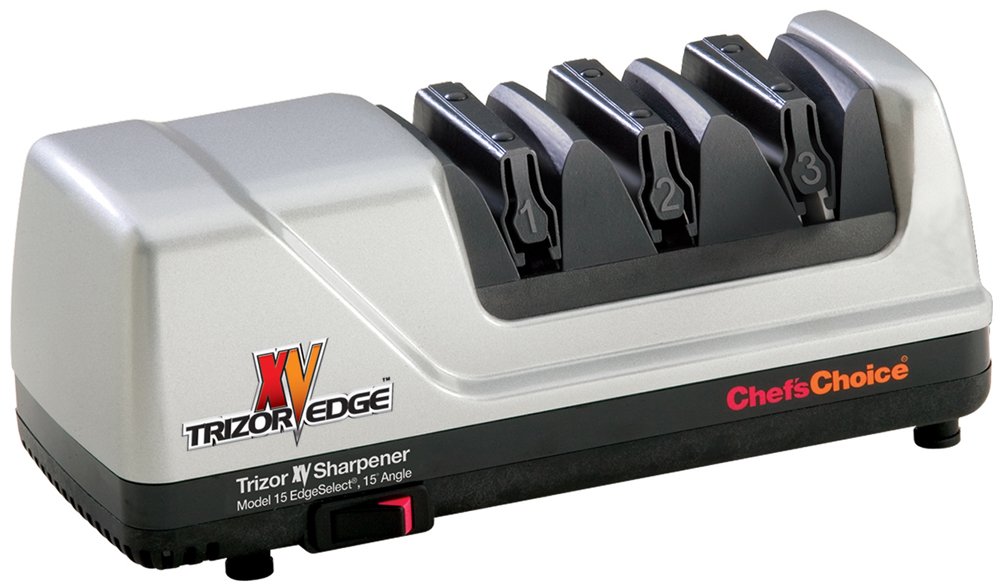 Chef’s Choice makes a range of knife sharpeners and they come highly recommended. Cook’s Illustrated gives this one top marks, as well.

It is available in black, white, and brushed metal. The “trizor” name refers to the unique 3-bevel edge this sharpener creates, which is supposed to be more durable than a typical “v-shaped” 15º blade. This sharpener includes three stages—the first has the roughest abrasive edge and creates the first bevel, which sets the 15º angle of the blade; the second stage is finer and hones the second bevel; the third stage provides the final polish to the blade. This is also the setting to use for serrated knives.

Many people find they only need to use the 2nd and 3rd stages as the first is too rough when the edge is already at 15º. The stages can also be used to shape knives for specific tasks—cutting through tough, fibrous foods like squash, for example, requires the rougher, more “toothy” edge of the 1st stage, whereas slicing fish requires the more refined edge you get from using all three stages.

Because this sharpener always sharpens to a 15º angle, many knife owners find that their knives are even sharper than they were out of the box. It seems to be an impressive, high quality sharpener that is useful for most home cooks.

The most often cited issue is a misalignment in the sharpening disks. Some people really chewed up their knives because of this issue, so I’d recommend always trying out a sharpener with some cheaper knives to be sure it works before putting good knives to the sharpener. The other issue is that the guides through which you put the knife into the sharpening groove are plastic and can wear easily if you’re not careful to avoid them with your knife blade.

This sharpener is another that is often recommended, particularly if you want to maintain the original 15º or 20º angle of your knives, as it includes the option to do both. Chef’s Choice makes other highly rated sharpeners that only have the option for maintaining 20º blades, so this is marketed as providing an option for Asian-style blades as well. It is available in brushed metal and white, and the disks are made with diamond abrasives.

Unlike the Trizor, it maintains a more traditional straight or single beveled edge on your knives., but you could still use it to put a 15º blade on a 20º angled knife.

Many people have great success with this sharpener (so much, that they warn to be careful with your extra-sharp knives!). Most find that after reading the instructions, they can sharpen their knives to be as good or better than they were when they bought them.

The biggest drawback is again the plastic guides which are susceptible to getting sliced and nicked through use.

Ken Onion is a well-known American custom knife designer and he lends his name to this tool. This sharpener offers a lot of versatility as it can be used for tools as well as kitchen knives.

The unit sharpens with sanding belts rather than disks, and the belts can easily be changed out when worn. It comes with 5 belts of varying degrees of coarseness.

The sharpener does have an angle guide which you can set between 15º and 30º. Generally, though, this sharpener requires a bit more knowledge than something like the Chef’s Choice models which really walk you through the process.

One issue users note is that it creates a lot of dust from the metal filing down. Given that, it’s better used in a workshop or outside. The dust can create scratches along the blade during the grinding process. This sharpener also favours right-handed users.

This is very simple electric knife sharpener. It sharpens in two stages—one to reshape the blade, and a second to hone the blade.

It includes removable receptacles that catch the metal filings and can easily be emptied when full. It also has an auto-stop feature that stops the filing rotation if the user applies too much pressure.

Many people find this does a nice job of sharpening their blades but it does have some limitations. For one, it doesn’t work with serrated knives. A few users also explain that it doesn’t work for knives that have a thick full hilt, as many traditional European-style chefs knives do, because the hilt can’t fit into the narrow sharpening slots.

The sharpening system also seems to be highly aggressive. Some note that over time, the sharpener really takes a lot of metal off the blade, wearing the knives down quickly.

An electric knife sharpener is one of those tools where the quality really matters. Despite the excellent price of the Linkyo Electric Blade Sharpener, I think it’s too basic to trust with high quality knives. It would perhaps be adequate if you’re regularly using cheap knives and replacing them.

If you want the ease of an electric sharpener, I think the Chef Choice Trizor model is a great option. Even though it will reshape your European knives, it’ll give them a very sharp edge that lasts due to the trizor design. If you want even more versatility and hope to become more hands on with the sharpening experience, the Work Sharp is another high-quality option.

After you sharpen those knives, watch your finger tips!