For many people, pork roast is hands-down the most delicious meat. It’s rich and super savory and can be satisfyingly crunchy or fall-off-the-bone tender. In this article, I’ll explain the best way to cook pork tenderloin in the oven with foil. This is an easy and delicious pork recipe that can be adapted with various spices and flavors. As its name suggests, tenderloin is more tender than pork loin. It’s also much smaller. One whole tenderloin serves 3-4 people, though this easy recipe can easily be doubled for company. This is a main dish the whole family can enjoy!

Baked pork tenderloin is a very simple dish that makes a great dinner, but it can be seasoned in many ways. The easiest option is to add a few rosemary sprigs before wrapping up the foil. Simply rinse 4-5 rosemary stems and lay them around the pork after adding the olive oil, salt, and pepper in Step 3. Another easy option is using 1-2 tsp of curry powder, garam masala, Cajun blend, jerk seasoning, or any other spice mix that you like. Follow the directions in Step 3, rubbing the seasoning into the meat before wrapping up the foil.

Sauces are also a good way to flavor baked pork tenderloin, as they give you a more tender pork dish and often call for simple ingredients. Honey mustard sauce is a classic condiment for pork, and it works well with this simple recipe. In a small dish, combine ⅓ cup whole grain mustard, ¼ cup mild honey, 1 tbsp olive oil, 1 minced garlic clove, ½ tsp salt, and ¼ tsp pepper. Once you’ve placed the pork on the foil, brush it generously with the sauce. Wrap up the foil and bake as directed. If you want to create a nice crust for serving, take the tenderloin out of the oven when it’s nearly done and open the foil. Broil for 2 minutes, until the top is golden brown. You can also use this technique with other sauces, such as barbecue or an herb dressing.

Another combination that helps keep the meat super moist is prunes and ginger. This combination is often used with pork loin, a much larger cut, but it works just as well with tenderloin. As a bonus, it creates a delicious sweet spiced sauce that you can serve with the meat.

Prepare the prunes by combining 1 cup chopped prunes in a small saucepan with ¼ cup water and 1-2 tsp grated ginger. Add salt and pepper to taste, even a little orange zest if you want! Cook on low for about 10 minutes, adding more water as needed, until the prunes and spices form a thick sauce. Cover the tenderloin with the sauce as directed in Step 3, then continue with the recipe.

You may want to serve the tenderloin with a side dish such as roasted vegetables or a salad. Roasted vegetables are particularly easy to make with this recipe. Simply peel and chop a few carrots and potatoes into ½-inch chunks, then toss them with 1 tbsp olive oil and a pinch of the same spices you used for the pork. Put them in the oven (here are some oven cleaners for when it comes time to cleaning your oven) in a shallow baking pan when you start the tenderloin, and they should be done around the same time.

Preheat your oven to 350F and position the rack in the middle of the oven.

2. Prepare the pan and foil

On the baking sheet, lay out a sheet of aluminum foil at least 4 inches longer than the length of the tenderloin.

Lay the pork on the foil and drizzle it with olive oil, then sprinkle the salt and herbs or spices you are using evenly on top. Rub the seasonings into the meat. If you’re using a seasoning variation with liquid ingredients or a sauce, skip the olive oil and add the salt and pepper to the sauce instead. Cover the tenderloin on all sides with the sauce before wrapping the foil. 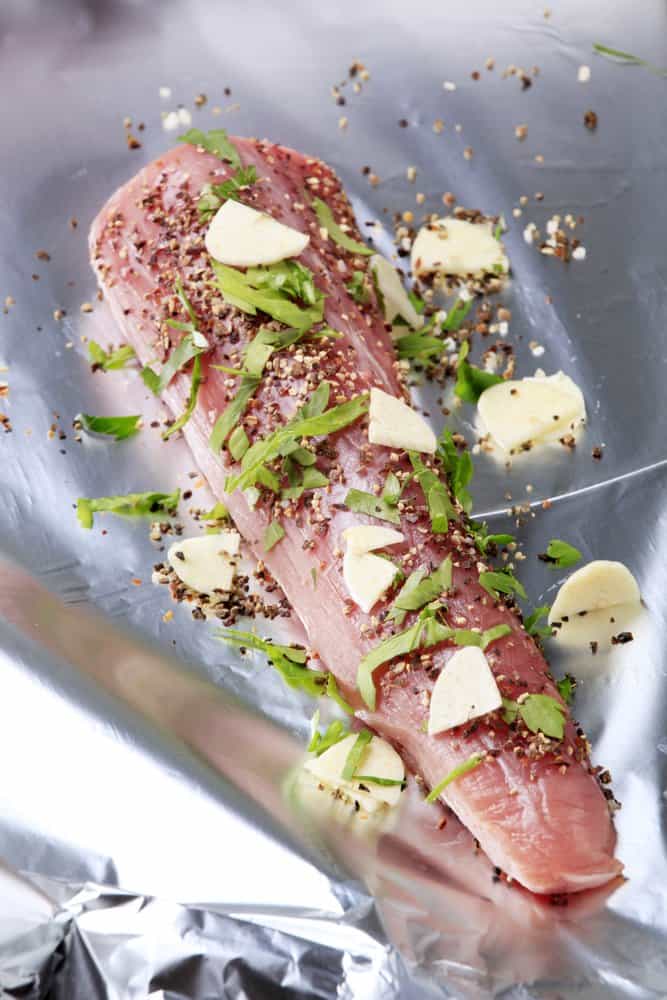 Bring the long edges together first and fold them over a few times, then roll up the ends. It’s fine to leave some space inside for air circulation, but make sure it is sealed tightly to lock in moisture.

Put the pan in the middle of the oven and bake for 40-45 minutes until the internal temperature reaches 145 degrees fahrenheit. Use a thermometer to check the internal temperature of the meat after 30 minutes of cooking in case your oven runs hot. If you wish, you can unwrap the pork during the last 5-10 minutes of cooking to allow it to brown on top, or broil for 1-2 minutes as mentioned above. 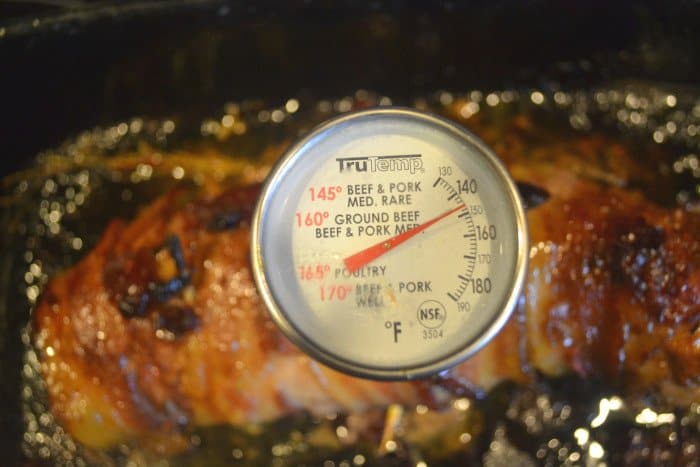 6. Remove from oven and rest

When the tenderloin reaches 145F, remove it from the oven. Open the foil slightly to allow steam to escape for the remaining time, and let the pork rest for 10 minutes to redistribute the juices.

Remove the tenderloin from the foil packet and lay it on a large cutting board. With a sharp carving knife, slice the tenderloin into ½-inch thick medallions (you can do thick slices too – it’s up to you). Arrange the slices on a serving platter and garnish with sauce or fresh herbs.